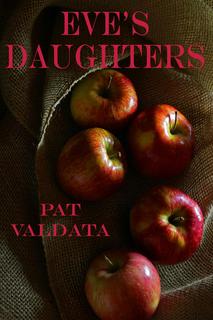 Now available!
Hear Pat Reading from The Other Sister and Eve's Daughter's (5.25 MB)

Great news: My latest novel, Eve's  Daughters, published by Moonshine Cove Publishing, won first prize in the Novel category from the Delaware Press Association and received an Honorable Mention from the National Federation of Press Women.

Eve's Daughters puts a feminist spin on the classic myth of The Fall, times two. Book One takes us back to the Early Copper Age when a matriarchal, agricultural community encounters patriarchal nomads for the first time. Book Two, set in the more recent past, retells Milton's version of the Adam and Eve story, filling in details of what happened after they were thrown out of that famous garden.

My other novels are Crosswind (Wind Canyon Books) and The Other Sister (Plain View Press), which won a gold medal from the Arpad Academy of the Hungarian Association. The Other Sister is available in print and digital editions.

I received an MFA in writing from Goddard College and twice received Individual Artist Awards from the Maryland State Arts Council. In 2013 I was awarded a grant from the Mid Atlantic Arts Foundation for a residency at the Virginia Center for the Creative Arts.

The Other Sister is a passionate, startling and, wonderfully readable novel.

Selected Poems
Where No Man Can Touch

It’s a triumph, at once whimsical and earnest in its celebration of pioneering women in flight.